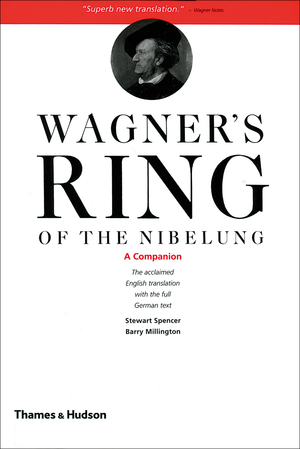 "An important work for Wagnerites and musical scholars."—Choice

There had long been a need for a modern English translation of Wagner’s Ring—a version that would be reliable and readable yet at the same time be a true reflection of the literary quality of the German libretto. First published in 1993, this acclaimed translation, which follows the verse form of the original exactly, filled that niche. It reads smoothly and idiomatically, yet is the result of prolonged thought and deep back- ground knowledge.

The translation is accompanied by Stewart Spencer’s introductory essay on the libretto and a series of specially commissioned texts by Barry Millington, Roger Hollinrake, Elizabeth Magee, and Warren Darcy that discuss the cycle’s musical structure, philosophical implications, medieval sources, and Wagner’s own changing attitude to its meaning. With a glossary of names, a review of audio and video recordings, and a select bibliography, this book is an essential complement to Wagner’s great epic.

Stewart Spencer is a noted translator. He lives in England.

Barry Millington is the editor of The Wagner Journal. He lives in England.