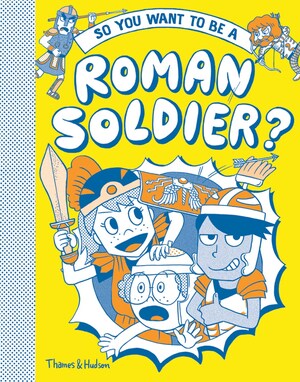 An essential guide for wannabe legionaries—and fair warning to those brave, or stupid, enough to sign up.

In this highly entertaining adventure, Kate, Eddie, and Angus travel back in time to see if they have what it takes to be a Roman soldier. Under the guidance of an ancient career counselor and one of the Roman Empire’s most intimidating centurions, they are inducted as newbie legionaries and discover firsthand the highs (sacking a city!) and lows (sharing a bum sponge) of life in the Roman army.

After passing their initial training challenges, our young crew discover how to use a shield as brass knuckles, how to operate a catapult, and how to avoid a javelin in the skull. These, and many other handy lessons, are now available to children dreaming of a career as an ancient Roman warrior.

So You Want to Be a Roman Soldier? draws on the latest scholarship by noted author Philip Matyszak and is illustrated throughout with zany drawings by Japanese cartoonist Takayo Akiyama. Quizzes, training challenges, pros-and-cons lists, and more will help readers personalize their journeys to soldierhood. The result is a book that brings to life the experience of a Roman soldier in 100 CE.