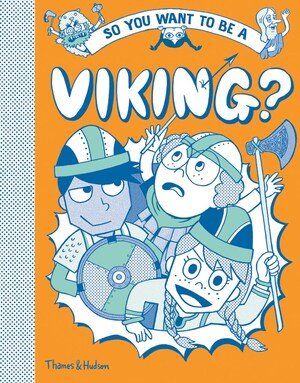 An essential guide for wannabe Vikings—and fair warning for those courageous, or crazy, enough to pledge allegiance to the cause.

Kate, Eddie, and Angus are dazzled by pictures of Viking warriors’ deadly axes and blingy swords in their library books. But when they’re transported back in time to Scandinavia in 991 CE, they must figure out if they have what it takes to become Vikings themselves.

A big, burly Viking called Bjorn initiates the kids in the ways of wielding a battle ax, plundering and looting, and soon they learn all sorts of other tricks as well, including how to get shipshape and navigate the seven seas with just a stone, how to recite rude poems, and how to scare enemies into submission before a battle even begins. Hervor, the haunted shield-maiden, is also on hand to share her tips on how to take off with a handsome ransom and how to make it into Valhalla in the afterlife.

So You Want to Be a Viking features the field’s latest scholarship and is illustrated throughout with zany illustrations by Japanese cartoonist Takayo Akiyama. Any kid who’s ever daydreamed about being a fierce Norse warrior will love this interactive guide.

A handy guide for young readers thinking that life on a longship in pursuit of plunder might be for them. Salutary reading for armchair berserkers and shield maidens.

John Haywood is a fellow of the Royal Historical Society of Great Britain. His many publications include Viking: The Norse Warrior’s (Unofficial) Manual, on which So You Want to be a Viking is based.