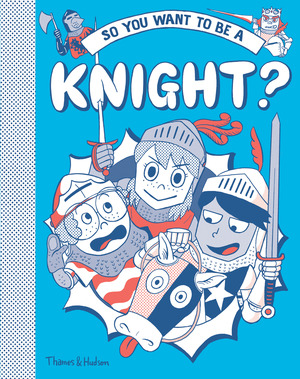 An essential guide for all aspiring knights who dream of chivalrous glory and heroic quests.

Have you ever dreamt of swapping your backpack for a suit of armor and riding o to join your fellow knights on a quest? King Arthur superfans Kate and Eddie long to do just that. One weekend, while exploring the towers and corridors of a historic castle with Kate’s younger brother, Angus, the three adventurers travel back in time to the fourteenth century to see if they have what it takes to be knights.

Tutored by none other than the original author of the Book of Chivalry, Geoffroi de Charny, these young squires learn how to regale their friends with stories of battles won and lost, discover the secrets of the chivalric code—including knightly etiquette and the trick to getting your armor on and o —and receive vital weapons training. Kate, Eddie, and Angus learn how to wield a lance during a jousting tournament, how to somersault in a suit of armor, how to rally the troops with a poem, and how to be a female knight (in case being the damsel in distress just isn’t for you).

Full of zany illustrations and inspired by the book Knight, written by medieval history expert Michael Prestwich and based on an original chivalric manual, So You Want to Be a Knight? explores the life of a medieval knight in irreverent but accurate detail.

Hannah Pang is an editor with over ten years of publishing experience and the author of The Moon and Wilderness.

Michael Prestwich is Emeritus Professor of History at the University of Durham. He has written many books including Medieval People.