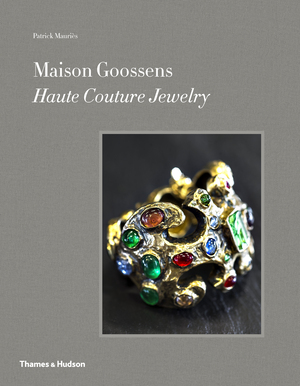 Haute couture jewelry from Goossen’s, one of the most revered names in the field

Goossens is one of the most prestigious names in haute couture jewelry of the last half century. Robert Goossens worked with Coco Chanel in the 1950s, cultivating an original style inspired by baroque and Byzantine art. He went on to design jewelry for the world’s foremost fashion houses, pursuing notable collaborations with Balenciaga, Grès, and Yves Saint Laurent. As well as the emblematic rock crystal jewelry, baroque pearl brooches, and Byzantine cuffs famously associated with Chanel, Goossens’ designs combine real and faux gemstones, making fashion jewelry both precious and bold at once. Robert’s son, Patrick, has reimagined many original Goossens styles for Dior, Alexander McQueen, and Louis Vuitton among others. Martine, his daughter, collaborates regularly with architect Peter Marino to decorate the interiors of the most famous couture houses in the world. The Goossens family upholds the meticulous standards of the house, now part of the stable of exceptional craft practitioners owned by Chanel’s Paraffection subsidiary.