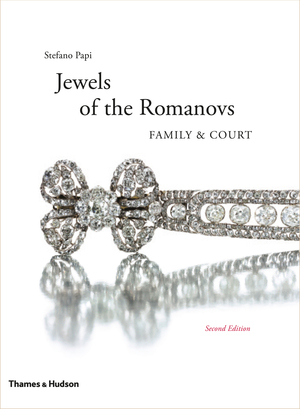 An amazing collection of images of the Romanovs, their world, and their fabulous jewels brings the last years of the dynasty to life

The Romanovs ruled Russia from 1613 to 1917, when the Revolution brought their reign to an end. The late nineteenth and early twentieth centuries were a time of elegance and extravagance for the tsars and the wealthy families with whom they were linked by marriage, and nowhere are these lavish tastes more apparent than in the imperial jewels.

Every jewel tells a story. Through his work at Sotheby’s and Christie’s and his own research, Stefano Papi has spent years unraveling the mysteries of Russian imperial jewelry. He identifies pieces with little or unknown provenance and uncovers the fascinating stories behind the jewels and the people who wore them, from the golden years through the Revolution to life in exile in Europe and America. This new edition, published to tie in with the 400th anniversary of the Romanov dynasty, features forty-eight additional pages and some sixty new illustrations.

Stefano Papi is based in London and has worked as Senior European Specialist in the jewelry departments of both Sotheby’s and Christie’s auction houses.