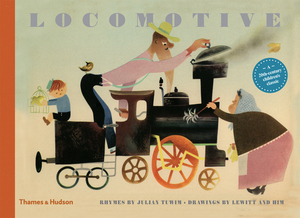 In the late 1930s renowned Polish poet Julian Tuwim, was asked to write three poems for children. The publisher Przeworski connected the three poems into one book, Locomotive, and commissioned illustrations from celebrated Polish illustration duo Lewitt and Him. Locomotive was the beginning of a creative partnership that lasted many years.

Featuring the original three poems, Locomotive, The Turnip, and The Bird’s Broadcast, children learn what’s inside each train carriage as it chugs along, how many people, animals, and friends it takes to pull a turnip from the ground, and what happens when birds of all kinds gather for a meeting in the woods.

After its original publication in 1939 in Polish, Locomotive was swiftly translated into French and English the next year, appearing at a time when it would have been a surprise and a joy to encounter bright colors and modernist- inflected imagery. Both classic and modern, its imaginative storytelling and appeal has endured and will delight children today as much as it did eighty years ago.

All three stories and the illustrations are remarkably creative and fun. The impressive translation maintains a seamless poetic rhythm and rhyme and is still relevant 80 years later. Don't be fooled by the old-fashioned vibe, this book smartly holds its own alongside contemporary children's literature.

Lewitt and Him was formed by Jan Le Witt and George Him in Warsaw in 1933. They designed advertisements, posters, pamphlets, book covers, and illustrations for literary magazine Wiadomosci Literackie. They are particularly remembered for their World War II posters, such as The Vegetabull.