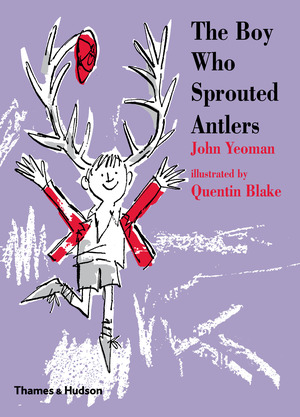 About a boy who sprouts antlers and the power of self-belief, this classic tale by John Yeoman, illustrated by Quentin Blake, is as charming and relevant today as it was fifty years ago.

It is nearly summer and Billy Dexter and his classmates are making baskets. Their teacher is so appalled by Billy’s efforts that she offers him a pep talk. “As long as you set your mind on something and try hard enough, there’s nothing you can’t do.” Billy loves the idea that he can do anything, but his friends disagree. “What about growing horns?” suggests Melanie. It’s a challenge Billy has to accept.

Sure enough, when Billy sets his mind to it, antlers start to grow. But despite his mother’s dismay, Billy’s new condition is accepted and life returns to normal. That is, until Billy spies a burglar in the headmaster’s office and does what any child who has sprouted antlers would do—he head-butts the intruder. Billy instantly becomes a hero. With the change of season, Billy sheds his antlers, but before long, his friend Melanie issues another boy in their class a new challenge: “Bet you couldn’t grow a trunk.”

John Yeoman was head of English at the French Lyceée in London. His collaboration with Quentin Blake has resulted in a long list of successful children’s books.