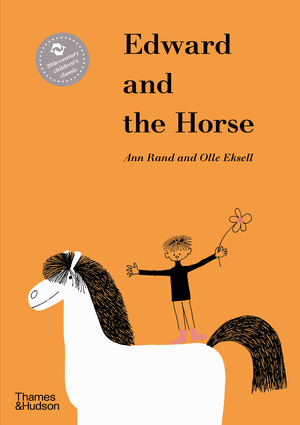 Edward lives on the twenty-first floor of a large apartment building in New York City. In the lobby a sign reads: “No dogs or cats allowed.” This isn’t much fun for someone like Edward, who would have loved a dog or cat to keep him company. But the sign doesn’t say anything about horses …

Edward sets out in search of a horse who likes the city and who won’t cost a lot of money to keep. Along the way, he meets a friendly fireman who offers him a helping hand. Edward discovers Smitty, whom he unhitches from a vegetable cart and takes home immediately. Before Edward and Smitty can get anywhere near the freight elevator, they are stopped by Smitty’s owner …and his reaction surprises all of them!

This charming journey benefits from bold mid-century illustrations and will appeal to both design-loving parents and pet-crazy children at story time.

Ann Rand (1918–2012) was an American architect and author. She trained as an architect with Ludwig Mies van der Rohe and wrote several children’s books that were illustrated by her husband, the famous art director and graphic designer Paul Rand. These include Sparkle and Spin, I Know a Lot of Things, Little 1, and Listen! Listen!

Olle Eksell (1918–2007) was a Swedish illustrator and graphic designer. He and his wife, Ruthel, a fashion designer, lived in the United States after the Second World War and became close friends with Paul Rand and, later, Ann Rand.