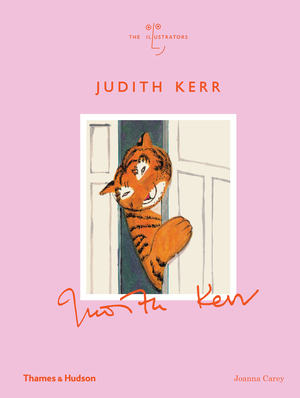 A thoughtful and intimate portrait of Judith Kerr, the much-loved children’s illustrator behind classics such as The Tiger Who Came to Tea and Mog the Forgetful Cat.

This season’s second volume in The Illustrators series showcases the work of Judith Kerr, one of Britain’s most beloved authors and illustrators. She first started writing and illustrating stories for children when in her forties and some fifty years later she is still producing bestselling books. Her first book, The Tiger Who Came to Tea, is a well-established classic and the series about Mog the cat now runs to seventeen books in numerous editions worldwide. Kerr’s semiautobiographical children’s novel When Hitler Stole Pink Rabbit, about her family’s escape from Germany in 1933, is widely read and used in schools to teach what it is like to be a refugee.

Joanna Carey, who has had unrestricted access to Judith Kerr and her archive, explores the backstory behind Kerr’s popular books and analyzes how she works. She draws on a range of never-before-seen visual materials to take readers behind the scenes of Kerr’s unforgettable creations. The result is not only a celebration of Kerr’s classic work, but also a thoughtful and intimate account of her long and remarkable career.

Joanna Carey is a writer, artist, and former children’s book editor for the Guardian.