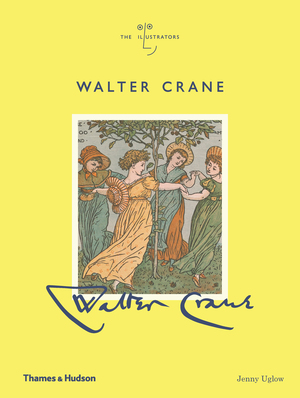 An exploration of the life and work of Walter Crane, the pioneering British socialist artist who transformed the illustration of children’s books.

This volume in Thames & Hudson’s The Illustrators series showcases the work of Walter Crane, one of the most influential children’s book creators of his generation. Crane transformed the illustration of children’s books with his bold outlines, jeweled colors, and vivid characters. While many knew Crane for fantastical children’s tales, he was also a leading voice in the aesthetic and Arts and Crafts movements and a powerful socialist.

Along with Randolph Caldecott and Kate Greenaway, Crane pioneered the child-in-the-garden motifs that would characterize nursery rhymes and children’s stories for decades. Craftsman and visionary at once, he created powerful images for the new socialism in the latter part of the nineteenth century.

Distinguished biographer Jenny Uglow expertly narrates a fascinating study of how Crane’s art and politics developed from his childhood love of Pre-Raphaelite painting and the influence of the ideas of William Morris and other progressive thinkers of the time. This book is a brilliant record of an artist who blended styles and influences like no one before him.

Jenny Uglow’s books include prize-winning biographies of Elizabeth Gaskell and William Hogarth. Her book on Thomas Bewick won the National Arts Writers Award, and her work on Charles II was shortlisted for the Samuel Johnson Prize.