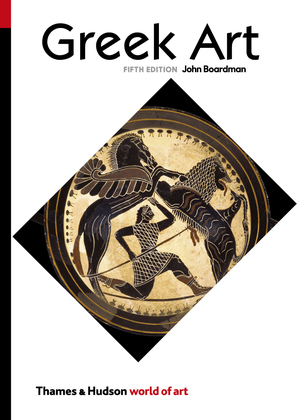 John Boardman, one of the best known and acknowledged scholars of the classical Greek world, has updated his definitive survey of its arts, the most influential and widely known historic artistic tradition of the Old World. In the twenty years since the last edition was released, valuable evidence has come to light which has dramatically enhanced our understanding of the arts of ancient Greece and their influence.

It is now known that Greek artists completed their stone sculptures with realistic color, as well as working with a wealth of other materials. This proves that the romantic notion of an age of classic, pure white marble is a Renaissance construction which has persisted to the present day. The work of individual artists, as well as schools of artists, can be identified, creating a clearer picture than ever before of how art and artistic traditions traveled throughout the Greek world and beyond it.

Boardman encourages the reader to consider the masterpieces that have been preserved in their original context. He weaves into his discussion of the arts insights into the society that produced them. Illustrated in full color throughout for the first time, this fifth edition demonstrates yet more vividly the artistic aims and achievements of ancient Greece.

[Greek Art's] strength lies in that it dispels old, incorrect, and widely held notions dating from the time of the European Renaissance about Greek art… The attention to detail that Boardman imparts to each facet of ancient Greek art will further facilitate an enhanced and enriched discussion about the culture and society that produced some of the world's most iconic and beloved works of art in and outside classrooms.

John Boardman, Lincoln Professor Emeritus of Classical Archaeology and Art at Oxford University, has written widely on the art and archaeology of ancient Greece. His previous books include The Greeks Overseas, The History of Greek Vases, The World of Ancient Art, and others.