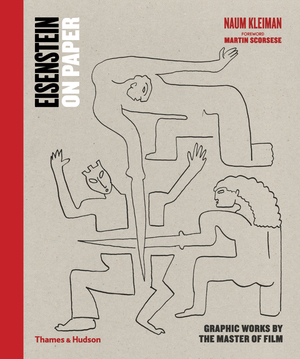 Sergei Eisenstein is regarded as one of cinema’s greatest revolutionaries. Less well known is that he was also a prolific graphic artist who drew compulsively as a means of expressing his ideas.

Arranged chronologically, Eisenstein on Paper is divided into six chapters, each prefaced by short texts relating to the graphic works of each distinct period, and interwoven with excerpts from Eisenstein’s own essays and diary entries. In 1930 Eisenstein traveled to the United States and then Mexico, where he produced hundreds of drawings influenced by ancient and contemporary Mexican art. Forced to return to Russia in 1932, Eisenstein came under the scrutiny of the Communist government and, struggling to make further films without political interference, turned again to sketching for artistic freedom. By the end of his life, he had pared his style down to the utmost simplicity and sincerity.

Despite completing relatively few films in his lifetime, Eisenstein made several thousand drawings. Eisenstein on Paper is the product of a groundbreaking collaboration with RGALI, the Russian State Archive of Arts and Literature, and is a fitting tribute to an incredible graphic talent.

Naum Kleiman is a Russian film critic, historian, and international authority on the work of Sergei Eisenstein. He is the president of the Moscow Central Film Museum and is the guardian of the Eisenstein Estate.

Martin Scorsese is an American director, producer, and screenwriter.