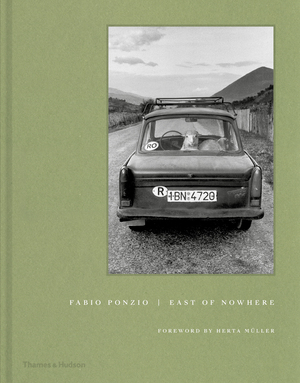 A poetic and empathetic vision of human perseverance, East of Nowhere captures, in stunning photographs, the reality of everyday life in central and Eastern Europe before and after the fall of the Berlin Wall.

In 1987, Fabio Ponzio embarked on a photographic odyssey across Central and Eastern Europe and the Caucasus. Starting in Istanbul, and making his way to Poland, Ponzio found little food in the shops and long lines to buy bread.  With supplies dwindling in the shops and immense crowds to buy necessities, the countries along his route were on the verge of collapse. And in the autumn of 1989, as the various regimes of communist countries from Budapest to Bucharest began to crumble, everything changed.

Equipped with a Leica, three Nikons and 100 rolls of film, Ponzio continued his travels across this immense territory, documenting lives marked by pain and sacrifice, now joined by a new energy, full of hope. For two decades, he returned to capture the traditions, faith, humility, courage, and strength of the people of the East.

From a previously unpublished archive and an award-winning talent, East of Nowhere is an exquisite collection of photographs that illuminate the physical and ideological divisions between Western and Eastern Europe, while offering a sympathetic and hopeful vision of the human condition.

[The] search for connection through photographs - imperfect and ultimately impossible as it may be, is ultimately what Ponzio gives us in these lovely and heartbreaking images.

Ponzio's photographs show a richly layered, nuanced look at the people and cultures of the region… [He] distills a tremendous amount of history and experience into each picture; every moment is characterized by incredible consequence and necessity… Full of darkness, warmth, beauty and affection.

Fabio Ponzio was born in Milan in 1959. In 1991, he was awarded the European Kodak Prize at Arles; in 1993, the Mother Jones Foundation Award for Documentary Photography; and in 1998, the Leica Oskar Barnack Award in Germany.

Herta Müller is a Romanian-born German novelist, poet, essayist and recipient of the 2009 Nobel Prize in Literature.