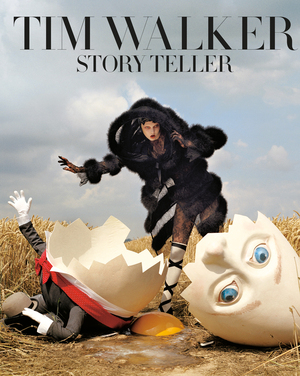 Tim Walker is one of the most visually exciting photographers of our time. Tim Walker: Story Teller, now in paperback for the first time, showcases many of his most dazzling images—“his daydreams turned into photographs.” Some of the biggest names in fashion and contemporary culture are included: Alexander McQueen and a memento mori of skull and cigarettes; Alber Elbaz sporting a pair of rabbit ears; Agyness Deyn in the sand dunes of Namibia; Helena Bonham Carter poised with Ray-Bans and a Diet Coke; and Stella Tennant in a pink cloud among the rhododendrons of an English country garden.

Singer and musician Kate Bush contributes a foreword and Walker himself an afterword, as well as illuminating his pictures throughout with personal observations. This exceptional and beautifully designed overview of a career caught in mid ow reveals just how much one man’s singular vision has influenced contemporary tastes in fashion, beauty, glamour, and portraiture.

You don't have to be a fashionista to appreciate this stunning collection of images by British fashion photographer Tim Walker.

Robin Muir is a writer and curator, specializing in photography. He was formerly a picture editor at British Vogue and the Sunday Times Magazine. He writes frequently for the international press, and his many publications include The World’s Most Photographed, Vogue Covers, and David Bailey: Chasing Rainbows.

Tim Walker is a prize-winning photographer whose work appears regularly in the world’s best fashion magazines, including Vogue, Vanity Fair, W, Harper’s Bazaar, and Love. His work is held in the permanent collections of both the Victoria and Albert Museum and the National Portrait Gallery in London.