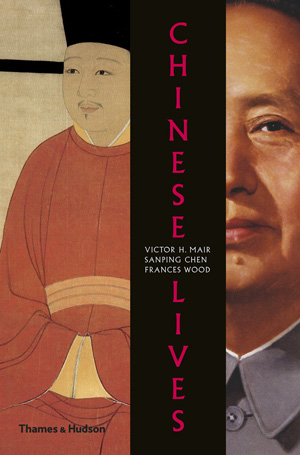 China is the most populous country on earth, with the longest history of any modern nation. Here, the full range of Chinese cultural and scientific achievements, as well as its military conquests, wars, rebellions, and political and philosophical movements, are told through the eyes of real people who created or were involved in them.

Illustrated with portraits, paintings, written documents, bronzes, sculptures, and location maps, and written in an authoritative yet accessible style, Chinese Lives provides the perfect introduction to China’s history and her peoples.

Besides emperors, generals, and leading scholars, the authors include lesser-known figures …help[ing] the reader understand ancient China as a multiethnic, open empire, in which people with different ethnic backgrounds contributed to each other and, in turn, to the common ‘Chinese’ culture.

Victor H. Mair is Professor of Chinese Language and Literature at the University of Pennsylvania and the author of many books including The True History of Tea and The Tarim Mummies.

Frances Wood is head of the Chinese Collections at the British Library.