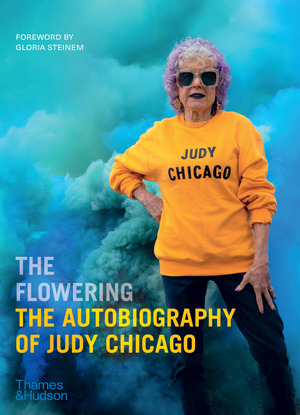 Judy Chicago is America’s most dynamic living artist. Her works comprise a dizzying array of media from performance and installation to the glittering table laid for thirty-nine iconic women in The Dinner Party (now permanently housed at the Brooklyn Museum), the groundbreaking Birth Project, and the meticulously researched Holocaust Project. She designed the monumental installation for Dior’s 2020 Paris couture show and, in 2019, established the Judy Chicago Portal, which will help to accomplish her lifelong goal of overcoming the erasure of women’s achievements.

The Flowering is her vivid and revealing autobiography, fully illustrated with photographs of her work, as well as never-before- published personal images and a foreword by Gloria Steinem. Chicago has revised and updated her classic first autobiography with previously untold stories, fresh insights, and an extensive afterword covering the last twenty years. This powerful narrative weaves together the stories behind someof Chicago’s most significant artworks and her journey as a woman artist with the chronicles of her personal relationships and her understanding, from decades of experience and extensive research, of how misogyny, racism, and other prejudices intersect to erase the legacies of artistswho are not white and male while dismissing the suffering of millions of creatures who share the planet.

The Flowering is an essential read for anyone interested in making change, now available in paperback.