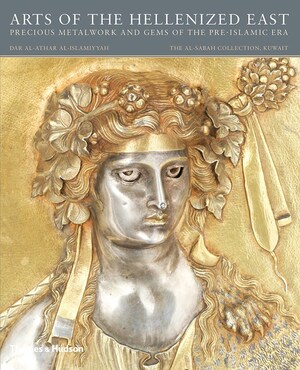 A sumptuous survey of ancient silver and other precious objects originating in the East from the prestigious al-Sabah Collection, now in paperback

Available for the first time in paperback, Arts of the Hellenized East is a visually compelling, informative, beautifully produced guide to one of the world’s most spectacular collections of precious metalwork, part of The al-Sabah Collection, Kuwait.

Leading expert Martha Carter contextualizes eighty spectacular bowls, drinking vessels, and other luxury items from the Hellenized East dating from the age of Alexander the Great up to the period preceding the advent of Islam. The decorative motifs of these exquisite objects testify both to the astonishing skill of their craftsmen and to the complex interconnected cultural histories of Greece, Iran, and Central Asia. Two illustrated essays supplement the discussion: Prudence O. Harper’s exploration of a group of eighteen magnificent Sasanian and later Central Asian works of art, including some important royal seals; and an essay by Pieter Meyers on the technology of ancient silver production, including a new metallurgical analysis that helps to clarify the objects’ origins.