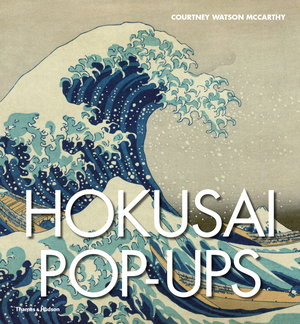 The iconic art of Japanese artist Hokusai, from great waves to waterfalls and mountains, reimagined in dramatic 3-D pop-ups

Katsushika Hokusai was a Japanese artist born in 1760 whose legacy remains, some 150 years after his death, as important as ever. His work influenced Impressionism and Art Nouveau, and a range of contemporary artists working today.

Realized in jewel-like colors, Hokusai’s simple views of everyday scenes in Japan, his sense of balance and harmony, and his highly stylized but ever-changing techniques seem to capture the spirit and traditions of his homeland. Hokusai Pop-Ups brings this stunning art to life. Noted works such as Ejiri in Suruga Province, Chrysanthemums and Horsefly, Phoenix, Kirifuri Waterfall at Kurokami Mountain in Shimotsuke, The Poem of Ariwara no Narihira, and the iconic, instantly recognizable The Great Wave are accompanied by explanatory text as well as complementary quotes from writers and artists such as Degas and Van Gogh.