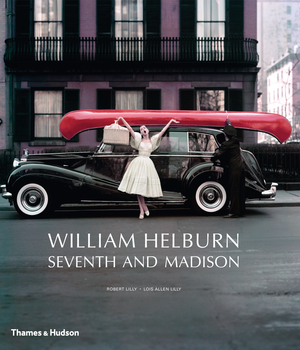 Lusciously illustrated and produced, here is the work of one of the major image-makers of the postwar era in fashion and advertising

William Helburn was the go-to photographer for many of the top advertising agencies in New York in the 1950s and 1960s. Shock value and an unrelenting hunger for success helped Helburn to a pioneer’s share in the revolutionary era of advertising and his work would also appear on the editorial pages and covers of major magazines.  As well as cars and cosmetics, Helburn shot Coca-Cola, Canada Dry, whiskeys, clothing lines, airlines, jewelry, cigars and cigarettes, and any number of other products. He worked with the top models of the day, from Dovima and Dorian Leigh to Jean Patchett and Barbara Mullen to Jean Shrimpton and Lauren Hutton.

William Helburn: Seventh and Madison is the first book to survey the photographic work of William Helburn and gives viewers a delicious taste of the vivid reality that the television series Mad Men seeks to evoke. Most of these images have not been seen since they were first published decades ago. In addition to the photographs, Robert Lilly contributes a biographical account of Helburn’s life and work, and former colleagues Jerry Schatzberg, George Lois, Sunny Griffin, and Ali McGraw offer insights into the lusty, creative spirit of William Helburn.

Introduc[es] this key character of a long gone era, in which the United States lived what was probably the most exciting and innovative time in advertising. Helburn [made] images that were outside the box and popped from the pages of the magazines and billboards, bringing new excitement to the ads he was hired to shoot.

Anyone interested in the postwar New York advertising circles portrayed in ‘Mad Men’ will find delight in William Helburn’s upcoming book ‘Seventh and Madison.’ The photographer, whose images appeared in the pages of magazines like Harper’s Bazaar and Life, had an obvious sense of humor and adventure.

This collection is peerless.

Celebrates [Helburn’s] out of the box approach advertising approach.

He shot Tippi Hedren lying on an ironing board on Seventh Avenue, Paul Newman and Joanne Woodward on stools as traffic whizzed by in the middle of Broadway…

Part of what makes ‘Seventh and Mad’ —which charts the seismic shift from the demure Eisenhower era to the increasingly freewheeling ‘60s—such fun is discovering what’s still in (Coca-Cola, animal prints, eyeliner, lots of eyeliner) and out (smoking, plush thighs). Some of the best pictures, however, aren’t ads or fashion shots but celebrity portraits, like Helburn’s black-and-white study of Paul Newman and Joanne Woodward in nourish Times Square for a 1960 issue of Town & Country.

With his penchant for shock value, Helburn became a leading photographer for many of New York’s top ad agencies in the 1950s and ’60s…Robert Lilly and Lois Allen Lilly’s ‘Seventh and Madison’ offers an in-depth look at the photographer’s life and work.

[Helburn] was an accomplished contemporary of the masters Avedon and Penn, specializing in his own sophisticated take on New York fashion. His particular gift was in presenting his models within a larger urban landscape…His fashion work was playful and vivid. Some of the advertising photography is dated, but the best pictures here recall a time when even the most elegant fashion was somehow earthbound, before the overuse of Photoshop began digitally carving models into alien beings. A series of picture with actress Sharon Tate for Esquire in 1967 and 1968 capture a stylish revolution in primary colors before the era went dark.

Helburn’s photographic gift was to juxtapose high sophistication with a stylized urban setting. One look at Dovima under the El and now you know who took the picture. But he didn’t ossify: in the late 1960s and early '70s his work became more natural, direct, and overtly sexual. He moved with the times.

A treasure for those who consider themselves fashion-obsessed…Helburn was to photography and fashion what Steve McQueen was to acting and Hollywood.

Helburn is now getting the recognition he deserves…A very compelling book.

Not only a testament to the man and his talent but helps preserve an important part of fashion and advertising photography. The clothes, the models, the settings recall a time of creativity and fun.

A native New Yorker, William Helburn became a photographer after serving in the U.S. Army. Upon returning home from World War II, a partner’s chance encounter with Fernand Fonssagrives turned him toward fashion photography. He attended Alexander Brodovitch’s famous Design Laboratory and went on to shoot for Harper’s Bazaar, Life, Esquire, Town & Country, Ladies’ Home Journal, McCall’s, and Charm. He was a first-call photographer for the top advertising firms of the era, including Altman- Stoller; Delehanty, Kurnit & Geller; Young & Rubicam, and Doyle Dane Bernbach. Helburn won numerous advertising and graphic arts awards. He would turn to television commercials in the 1970s, but continued shooting still photography into the early 1980s. He lives in Connecticut.

For more than thirty years, Robert Lilly, also a native New Yorker, has produced news programs, stories, and documentaries from Europe, the Middle East, and the Americas for companies including NBC, CNN, VH1, and Reuters. He lives in New York.

Lois Allen Lilly is from New York and Florida. She is a producer, reporter, narrator, and intellectual property specialist. She lives in New York.