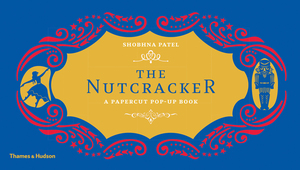 The magic of Tchaikovsky’s ballet The Nutcracker comes to life in this theatrical pop-up book created by papercut artist Shobhna Patel, whose delicate laser-cut pop-ups will enchant readers young and old. Patel has invented a new paper-engineering technique called the “paperscope,” which is used for the first time in this charming book.

The classic story begins on Christmas Eve when a little girl named Clara and her brother Fritz are gathered around the Christmas tree to celebrate with family and friends. Their mysterious uncle, Drosselmeyer the toy maker, gives Clara a beautiful wooden nutcracker who magically comes to life when the clock strikes midnight. So begins an enchanting adventure featuring all of Tchaikovsky’s original characters: the soldier mice, the Sugar Plum Fairy, and of course a handsome prince.

The Nutcracker is made all the more extraordinary by Patel’s intricate laser-cut illustrations. The book features four pop-up paperscopes that spring to life when the reader presses each paperscope down with their hand to reveal the scene hidden within. The effect is one of a magical series of stage sets, recalling the story’s origins as a ballet.