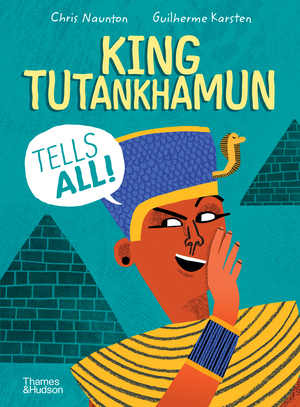 An entertaining new illustrated book for young readers that brings King Tut back to life so he can share his own version of history.

What would happen if the famous people of ancient Egypt were given the opportunity to tell their version of historical events—in their own words? It would be incredible! In this highly entertaining and comically illustrated book, King Tut is brought back to life to let readers in on the juicy details of his truly remarkable life.

In King Tutankhamun Tells All! readers hear firsthand what it was like to be rudely awakened from the afterlife by archaeologist Howard Carter, who discovered Tut’s tomb in 1922. Listen to Tut brag about his collection of blingy 18-carat gold sandals; discern the fake news from the truth about Tut’s premature death; and relish the gory detail of Tut’s mummification in this exciting book by Egyptologist Chris Naunton. Bringing to life the biography of famous figures from Egyptian history, this book helps young readers learn through the voice of one of history’s most interesting kings.

Guilherme Karsten is an award- winning Brazilian illustrator who has illustrated over ten books for children. He is the author and illustrator of Aaahhh! He won the Golden Pinwheel Grand Award and a Biennial of Illustrations Bratislava Plaque in 2019.