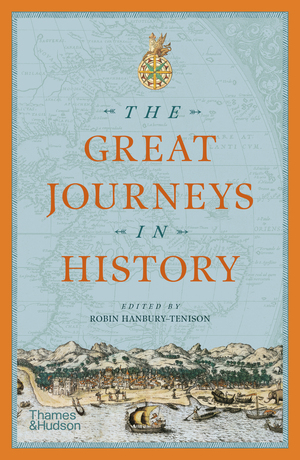 A lively collection of the adventurous stories of the greatest explorers in history.

Ferdinand Magellan, Genghis Khan, Thor Heyerdahl, Amelia Earhart, and Neil Armstrong: these are some of the greatest travelers of all time. This book chronicles their stories and many more, describing epic voyages—from early trips through the great port city of Alexandria to the latest journeys into space.

In antiquity, we follow Alexander the Great to the Indus and Hannibal across the Alps; in medieval times, we trek beside Genghis Khan and Ibn Battuta. The Renaissance eventually led to Columbus visiting the Americas and to the circumnavigation of the world. In the following centuries, global maps are filled in by Abel Tasman, Vitus Bering, and James Cook. Journeys specifically made for scientific discoveries, most famously by Alexander von Humboldt and Charles Darwin, begin. In modern times, the ends of the earth were reached—including both poles and the world’s highest mountain.

Editor Robin Hanbury-Tenison leads an incredible team of fifty-two contributors, including Robert Ballard and Ranulph Fiennes, who relate firsthand experiences with the journeys and places they describe. The Great Journeys in History chronicles the stories of bold, early travelers who explored the unexplored and who set out into the unknown, bringing alive the romance and thrill of adventure.

What sets the book apart is the erudition and experience of its contributors.

Robin Hanbury-Tenison is a well-known explorer, author, filmmaker, conservationist, and campaigner. A veteran of over forty expeditions, he is a leading member of the Royal Geographical Society and Survival International. His books include The Great Explorers and The Modern Explorers.