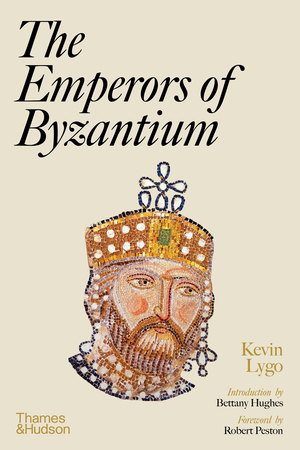 A vivid narrative history of one of the founding civilizations of the modern world, the Byzantine empire, evocatively told through the lives of its ninety-two emperors.

The Byzantine empire was one of the most successful states of the Middle Ages, ruling over a huge terrain straddling Europe and western Asia for eleven hundred years from the fourth to fifteenth centuries. This chronicle by Byzantine expert Kevin Lygo brings this majestic yet turbulent period to life through the lives of its emperors: the supreme military commander, the head of state, and God’s representative on Earth, no less.

These rulers, who included famous figures such as Constantine the Great and Justinian I, a scattering of women, as well as ruthless usurpers, left their mark upon the modern world with the establishment of the Eastern Orthodox Christian faith, the creation of a visual template for Christian art, and the magnificent artistic achievements of Hagia Sophia and Mount Athos.

Each illustrated biographical entry contributes to the story of how Byzantium shaped art, culture, religious beliefs, and justice systems, as well as the role this extraordinary empire played in halting repeated invasions, allowing the idea of “Europe” to flourish. Through this compelling history, Lygo paints vivid portraits of the entire Byzantine cast, with tales of petty revenge, religious devotion, sexual intrigue, and artistic brilliance. From soaring intellectuals to illiterate peasants, eunuchs, and despots, this is a humanizing portrayal of the individuals whose rule profoundly impacted the lives of millions.

Kevin Lygo is a connoisseur, collector and specialist in the Byzantine era, which when, combined with his flair for storytelling, make this a publication to savor.

Kevin Lygo is an expert in Islamic and Byzantine art who has traveled across Europe and the Middle East extensively. He has previously edited the publications Portraits of the Masters: Bronze Sculptures of the Tibetan Buddhist Lineages and Pages of the Qur’an: A Study of Islamic Calligraphy. He is director of television at ITV and was formerly director of television at Channel 4.

Robert Peston is a journalist, writer, and the political editor of ITV News.

Introduction and Notes By

Bettany Hughes is an award-winning historian, author, and broadcaster.