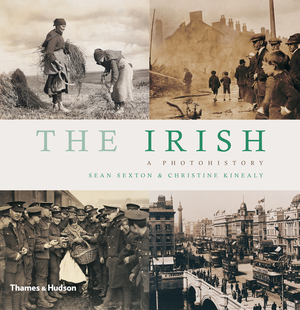 “An eloquent portrait of a long century of struggle in what was one of Europe’s poorest countries.” —Publishers Weekly

The first Irish photographs date from 1840, a year after Louis Daguerre announced his discovery of the photographic process. In the century that followed, Ireland was to know tragedy and triumph, bitter struggle and agonized compromise. The Great Famine killed over a million Irish poor between 1846 and 1851, and forced an even greater number to flee the horrors of their homeland. In the following decades, Irish political life was dominated by the struggle for land rights, for Home Rule, and ultimately for independence.

These images do more than tell a gripping political story. They give an insight into a people, a landscape, and a lost way of life. They evoke the grandeur of life in the Big House, home and symbol of the Anglo-Irish elite. They reveal the hard labor of rural survival: cutting peat for fuel, fishing, and tilling the soil against an often harsh landscape. And they show the transforming impact of modernity, as industry, railways, and urban expansion slowly brought Ireland into a new era.

Sean Sexton is an Irish-born photographic collector. His previous books include The Irish: A Photohistory.

Christine Kinealy is an Irish historian and the author of This Great Calamity: The Irish Famine 1845-52.