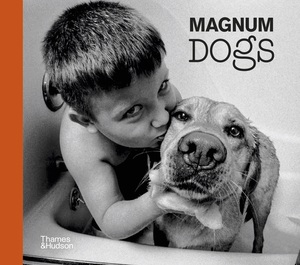 The ultimate collection of canine photography for the discerning dog lover with images selected from the renowned Magnum Photos archive.

Magnum Dogs brings together a brilliantly diverse and entertaining selection of images that showcase man’s best friend, through the visual wit and skill of Magnum’s photographers. This collection features some 180 photographs of dogs from across the world—and highlights the depth of their relationships with humans. The book is organized into five thematic chapters—“Streetwise,” “Best in Show,” “It’s a Dog’s Life,” “At the Beach,” and “Behind the Scenes.” These encounters include immaculately coiffed showdogs captured in wryly observed photography from the likes of Martin Parr and Harry Gruyaert as well as privileged, intimate glimpses of Hollywood stars alongside their trusted, four-legged confidants, as seen through the lenses of Eve Arnold and Dennis Stock.

Since the Magnum photo agency was founded eight decades ago, dogs have found their way into the collection’s most captivating images. Whether depicting pampered pooches lounging in Parisian apartments or beloved family dogs, these photos convey affection, humor, and insight into the universal human bond with canines.

Packaged in an irresistible gift format, this is the perfect book for anyone, around the world, who is a “dog person” at heart.