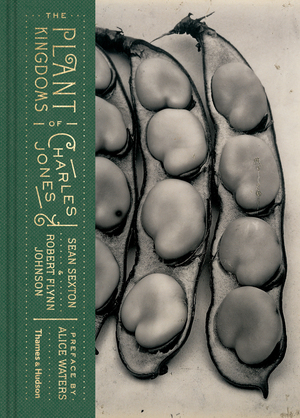 A stunning collection of portraits of vegetables, fruits, and flowers by a turn-of-the-twentieth-century visionary

In 1981, at Bermondsey Market in London, Sean Sexton, the Irish-born photographic collector, chanced upon the gelatin silver prints of photographer Charles Jones. Dating from the turn of the century, these beguiling studio “portraits” of tulips and sunflowers, onions and turnips, plums and pears are skillfully executed and startling in their originality. Shot as close-ups, with long exposure and spare composition, the works anticipate by decades the later achievements of modernist masters.

This volume presents Jones’s photography in sections devoted to vegetables, flowers, and fruit, with captions taken from Jones’s own identifications, written by hand on the back of the prints. Renowned writer and restaurateur Alice Waters describes the simple beauty of the photographs in the preface. Robert Flynn Johnson contextualizes the work in the still life tradition and pieces together the fragmentary evidence about the life of this mysterious figure, who trained as a gardener and worked on a number of private estates, but who left no notes or diaries to explain why he photographed the plants he saw every day. The perfect antidote to appetites jaded by processed foods and late twentieth-century consumerism, the legacy of Charles Jones is a reminder of the bountiful riches of nature.

In 1981, photo historian Sexton came across a stash of beautiful gelatin silver prints of fruits, vegetables, and other plants at a London antiques market. The photos were the work of a local gardener, Charles Jones (1866-1959), produced around the beginning of the 20th century. Johnson contextualizes the photography and imparts what information he can about the man who 'left no notes or diaries to explain why he photographed the plants he saw every day.' This handsomely illustrated volume features a preface by writer and restaurateur Alice Waters.

[Charles Jones's] pictures are not only lush and nearly edible, they are surprisingly, severely modern in appearance-they resemble the work of Karl Blossfeldt, and anticipate that of Irving Penn. Do I need to mention that each specimen appears to represent the very apex of its species?

Sean Sexton is an Irish-born photographic collector. His previous books include The Irish: A Photohistory.

Alice Waters is a writer and restaurateur.