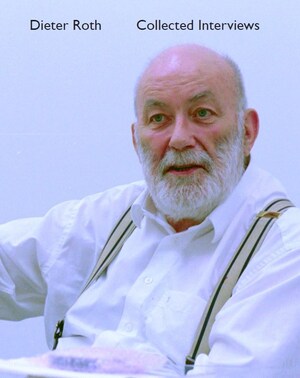 An intimate and inspiring firsthand encounter with the radical philosophy of the renowned twentieth-century artist Dieter Roth.

The oeuvre of Dieter Roth (1930–1998) encompasses painting, sculpture, drawing, printmaking, film, video, music, typography, design, architecture, and, last but not least, literature. “His books alone would give him a place of honor in 20th-century art,” wrote artist Richard Hamilton, who championed Roth very early on. But is there a philosophy that ties his media together? In these interviews, Roth offered many surprising and fascinating clues to his life and line of thought.

Included are conversations with Hamilton and the very intimate interview Roth conducted with writer Patrick Frey just a few days before his death, as well as many others. For Roth, who believed that art should not be harmless, but be true, the interviews were an attempt to depict what happens when speaking—the moments where a person loses their train of thought, when different languages get spoken, and when misunderstandings arise.

For anyone who wants to become acquainted with Dieter Roth—the artist and thinker, as well as the human being—there is no better, more amusing, and authentic introduction than the richly illustrated Dieter Roth Collected Interviews, which also presents many of his poems and prose in English.

Barbara Wien was born in 1953 in Munich and works as a gallerist, editor, and publisher in Berlin. She worked for Dieter Roth between 1985 and 1987, and planned the publication of the Dieter Roth Collected Interviews in collaboration with the artist.