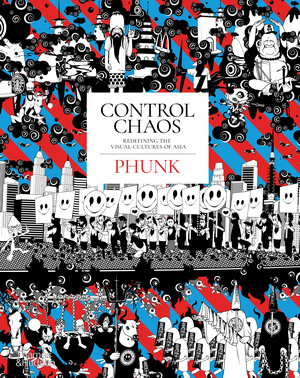 Celebrating twenty-five years of PHUNK, this monograph traces the ways in which the iconic Singapore-based collective has mixed urban street culture, art, and design to create a unique body of work.

PHUNK is a contemporary art and design collective based in Singapore. Founded in 1994 by Alvin Tan, Melvin Chee, Jackson Tan, and William Chan, they developed a new approach to collective art-making specific to southeast Asia that is based on the collaborative aesthetic of a rock- and-roll band and the visual elements of urban subcultures. Since then, PHUNK has exhibited widely and collaborated with musicians, including the Rolling Stones; fashion brands such as Hermes and Uniqlo; and international brands such as MTV, Nike, and Rolls Royce, producing work across a broad range of mediums.

Inspired by “Control Chaos,” a key silkscreen artwork that sparked PHUNK’s creative journey, this monograph is organized around three themes: “Collective Consciousness,” which looks into PHUNK’s early development; “Criti-Cool,” an exploration of the challenges of practicing art in Singapore; and “Connecting Worlds,” an examination of works that reflect our increasingly globalized world. With accompanying texts based on exclusive interviews with the collective, this inspirational overview is richly illustrated with original artwork and will be essential reading for fans of the collective as well as anyone interested in Singapore and Southeast Asia’s art and design scene over the past twenty-five years.

Justin Zhuang is a writer and researcher with an interest in design, cities, culture, history, and media. He has written several books about Singapore design, including Independence: The History of Graphic Design in Singapore Since the 1960s.