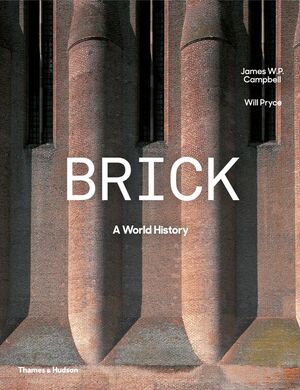 “A brilliant collaboration . . . The hundreds of color photographs are stunning in their clarity and composition. Highly recommended.”—Library Journal

This totally original architecture book—named 2004 Choice Outstanding Academic Title—follows the story of brick from 5000 BC to its use in building today, from the vast baths and basilicas of ancient Rome, through the wonders of Gothic brick in Germany and the majestic temples of Pagan, to its modern revival.

Marvelously illustrated with spectacular, specially taken photographs, Brick is at once an historical account of how bricks have been employed by architects of every period, a technical survey of brickmaking and bricklaying, and an essay on architectural and cultural history.

The authors have applied their expert visual and technical knowledge to more than one hundred themes, from bricks in ancient Egypt to their distinctive use by such modern masters as Louis Kahn, Alvar Aalto, and Renzo Piano. Great works of engineering—viaducts, tunnels, and bridges—are given prominence alongside great cathedrals, country houses, temples, and mosques, testifying to the incredible versatility and importance of bricks and brickwork.

Will Pryce is an award-winning photographer who originally trained as an architect at Cambridge University and the Royal College of Art, and photojournalism at the London College of Printing. His books include Big Shed, World Architecture: The Masterworks, and, with James W. P. Campbell, the widely acclaimed Brick: A World History.