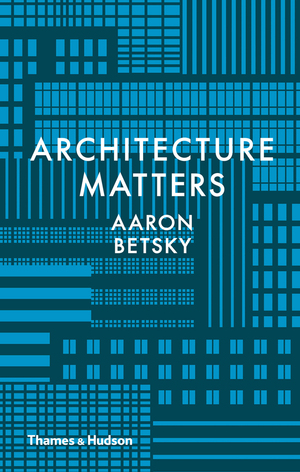 An illuminating introduction to the influence of architecture on the world, the environment, and human lives

Architecture matters. It matters to cities, the planet, and human lives. How architects design and what they build has an impact that usually lasts for generations. The more we understand architecture—the deeper we probe the decisions and designs that go into making a building—the better our world becomes.

Aaron Betsky, architect, author, curator, former museum director, and currently the dean of the Frank Lloyd Wright School of Architecture, guides readers into the rich and complex world of contemporary architecture. Combining his early experiences as an architect with his extensive experience as a jury member selecting the world’s most prominent and cutting-edge architects to build icons for cities, Betsky possesses rare insight into the mechanisms, politics, and personalities that play a role in how buildings in our societies and urban centers come to be. In approximately fifty themes, drawing on his inside knowledge of the architectural world, he explores a broad spectrum of topics, from the meaning of domestic space to the spectacle of the urban realm. Accessible, instructive, and hugely enjoyable, Why Architecture Matters will open the eyes of anyone dreaming of becoming an architect, and will bring a wry smile to anyone who already is.

A dazzling assemblage of writings… Aaron Betsky, renowned art and architecture critic, asks how and why our built environment should be democratized and humanized. This volume speaks not only to those immersed in architectural study or practice but serves as a spectacular collection of how-to's, a travelogue, the influence of art on architecture, and architectural theory.

A pleasurable, intriguing read… Part memoir and part manifesto, Architecture Matters draws from Aaron Betsky's diverse experiences within and engaging with the profession. Written to appeal both to the architecture community and to a general audience, the book seeks to define not just the importance of architecture in the world today but its future trajectory as well. Written in an accessible, conversational tone, this series of concise essays covers a wide range of topics, with some essays sequentially building on one another, while others meander down side paths.