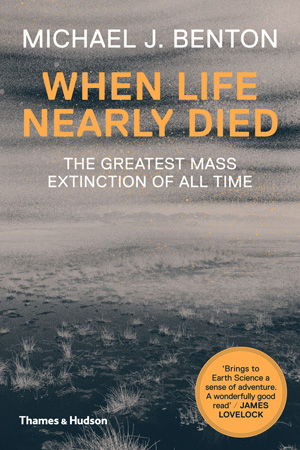 “The focus is the most severe mass extinction known in earth’s history. The science on which the book is based is up-to-date, thorough, and balanced. Highly recommended.” —Choice

Today it is common knowledge that the dinosaurs were wiped out by a meteorite impact 65 million years ago that killed half of all species then living. It is far less widely understood that a much greater catastrophe took place at the end of the Permian period 251 million years ago: at least ninety percent of life on earth was destroyed.

When Life Nearly Died documents not only what happened during this gigantic mass extinction but also the recent renewal of the idea of catastrophism: the theory that changes in the earth’s crust were brought about suddenly in the past by phenomena that cannot be observed today. Was the end-Permian event caused by the impact of a huge meteorite or comet, or by prolonged volcanic eruption in Siberia? The evidence has been accumulating, and Michael J. Benton gives his verdict at the end of the volume.

The new edition brings the study of the greatest mass extinction of all time thoroughly up-to-date. In the twelve years since the book was originally published, hundreds of geologists and paleontologists have been investigating all aspects of how life could be driven to the brink of annihilation, and especially how life recovered afterwards, providing the foundations of modern ecosystems.

Michael J. Benton is Professor of Vertebrate Palaeontology at the University of Bristol. His many previous books include standard reference works, textbooks, and popular books on dinosaurs and the history of life.