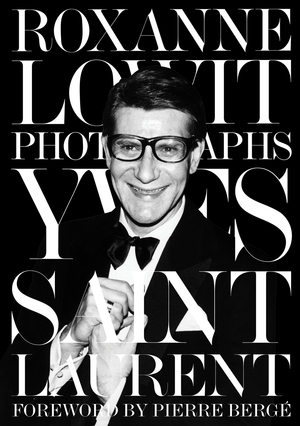 Yves Saint Laurent is a name synonymous with style, elegance, and high fashion. When he came on the scene at Dior and then started his own line, he quickly changed the way people regarded haute couture and the world of fashion itself. He revolutionized women’s evening wear when he introduced Le Smoking, a woman’s tuxedo, and made couture accessible to a younger generation.

Yves Saint Laurent is Roxanne Lowit’s personal photographic history of Saint Laurent, the man and the fashion, from 1978, the year she first met him, to the last show he gave in 2002. With contributions from YSL’s muses and admirers, including Catherine Deneuve, Betty Catroux, Lucie de la Falaise, Pat Cleveland, and Valerie Steele, this reduced format hardcover represents the backstage experience at YSL’s shows as Lowit saw them herself. Whether surrounded by beautiful models or peeking at the catwalk from the wings, every moment was a magnificent photo opportunity. Lowit shares magical moments of YSL with the world—intimate, social, absorbed in fashion—and creates a unique portrait of this towering figure of postwar couture.

Roxanne Lowit (1942-2022) was a New York-based fashion photographer who started taking pictures in the 1970s. Her photographs have appeared in many magazines, including Vogue, Vanity Fair, Elle, V Magazine, and Glamour, and she worked on numerous advertising campaigns for, among others, Dior, Barney’s, and Vivienne Westwood.