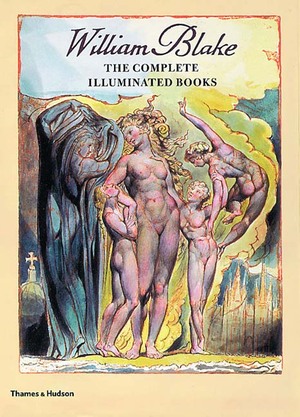 "If you know Blake's poems you're getting only half—or rather none of—the picture."—The New York Times

In his Illuminated Books, William Blake combined text and imagery on a single page in a way that had not been done since the Middle Ages. For Blake, religion and politics, intellect and emotion, mind and body were both unified and in conflict with each other: his work is expressive of his personal mythology, and his methods of conveying it were integral to its meaning. There is no comparison with reading books such as Jerusalem, America, and Songs of Innocence and of Experience in Blake's own medium, infused with his sublime and exhilarating colors. Tiny figures and forms dance among the lines of the text, flames appear to burn up the page, and dense passages of Biblical-sounding text are brought to a jarring halt by startling images of death, destruction, and liberation. Blake's hope that his books would obtain wide circulation was unfulfilled: some exist only in unique copies and none was printed in more than very small numbers. Now, for the first time, the plates from the William Blake Trust's Collected Edition have been brought together in a single volume, with transcripts of the texts and an introduction by the noted scholar David Bindman.

Includes: Jerusalem; Songs of Innocence and of Experience; All Religions are One; There is No Natural Religion; The Book of Thel; The Marriage of Heaven and Hell; Visions of the Daughters of Albion; America a Prophecy; Europe a Prophecy; The Song of Los Milton a Poem; The Ghost of Abel; On Homers Poetry [and] On Virgil; Laocoon; The First Book of Urizen; The Book of Ahania; The Book of Los.

David Bindman is an emeritus professor of the history of art at University College London. He is currently a fellow of the Hutchins Center for African and African American Research, Harvard University, and he was a visiting professor of history of art at Harvard, 2011-2017. His publications include Blake as an Artist, Hogarth and His Times: Serious Comedy, Ape to Apollo: Aesthetics and the Idea of Race in the 18th Century. Since 2006, he has been the editor with Henry Louis Gates, Jr., of the Image of the Black in Western Art series, in twelve volumes so far.