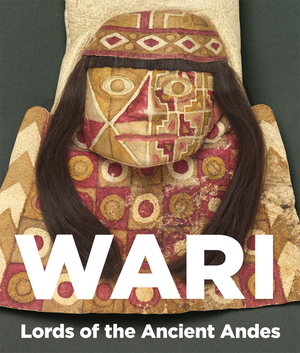 Featuring approximately 145 of the most sumptuous and culturally significant Wari objects from collections in the United States, Peru, and Europe, and published to accompany the first exhibition in North America of their startlingly beautiful art

An eminent ancestor of the better-known Inca, the Wari ascended to power in the south-central highlands of Peru in about AD 600, underwent a brief period of incandescently explosive growth, and then, by AD 1000, collapsed. Elite arts and the ideologies that informed them were among the Wari’s most prominent exports. From their capital, one of the largest archaeological sites in South America, they sent their religion along with elaborate objects and textiles out to highland provincial centers hundreds of miles to the north and south, and down into populous Pacific coastal areas to the west. The arts were crucial to the Wari’s political, economic, and religious communications: like other ancient Andean peoples, they did not write. The objects featured here cover the full range of Wari arts: elaborate textiles, which probably were at the core of their value systems; sophisticated ceramics of various styles; exquisite personal ornaments made of gold, silver, shell, or bone and often inlaid with precious materials; carved wood containers; and other works in stone and fiber.

An important contribution to the field…A readable, informative assessment of the Wari and their art.

Informative essays …put flesh on this long-lost race, accompanied by crisp four-color photography…[A] wonderful reference that will be a valuable resource in any library.

Stunning…By incorporating a wide variety of Wari arts from the figural to the abstract, and across media, the catalogue presents Wari art as a totality. The lavish illustrations, most of which are in full color, provide a visual database from which trends emerge, an internal logic coalesces, and the Wari become more understandable. Despite the lack of monumental forms, Wari artwork does not lack sophistication, and its influence ran deep.