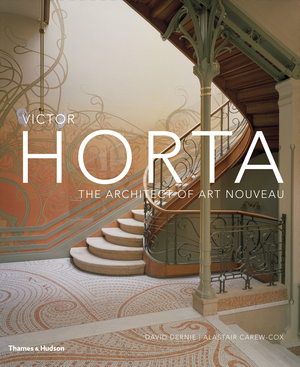 An expertly written and exquisitely photographed study of the buildings of Victor Horta, a central figure of Art Nouveau whose work was fundamental to modernist architecture

In the decade following the success of his design for the H\xc3\x83\xc2\xb4tel Tassel in Brussels in 1893, Victor Horta, the creator of Art Nouveau architecture, produced more than forty buildings—and a movement. Prepared in close collaboration with the Horta Museum, Brussels, Victor Horta: The Architect of Art Nouveau discusses the many influences on Horta’s designs and his legacy. The richly ornamental style of Art Nouveau, characterized by fluid lines based on natural forms, expressed a desire to abandon the historical styles of the nineteenth century and to develop a language that was beautifully crafted and thoroughly contemporary, laying the foundations for the development of modernism in architecture and interior design.

Detailed descriptions of nineteen projects representing the full range of Horta’s work—including Edicule Lambeaux, H\xc3\x83\xc2\xb4tel Autrique, H\xc3\x83\xc2\xb4tel Max Hallet, and the Brugmann Hospital, are illustrated with Horta’s original drawings and specially commissioned photographs by award- winning photographer Alastair Carew-Cox. Extensive photographs of H\xc3\x83\xc2\xb4tel Solvay—to which access had been denied for twenty years before Carew-Cox was granted special access, in recognition of his and David Dernie’s significant contribution to the study of Horta—are also included.

Belgian architect Victor Horta's (1861-1947) dynamic approach to design, form, materials, and sense of movement revolutionized architecture and propelled it into the realm of art nouveau… Visually stunning and exciting. Recommended for architecture and decorative arts collections.

David Dernie is an architect and educator. He studied at the University of Cambridge and then became a Rome Scholar in Architecture at the British School at Rome and was elected a Fellow of Fitzwilliam College, Cambridge.

Alastair Carew-Cox is an award-winning photographer specializing in architecture and interiors.