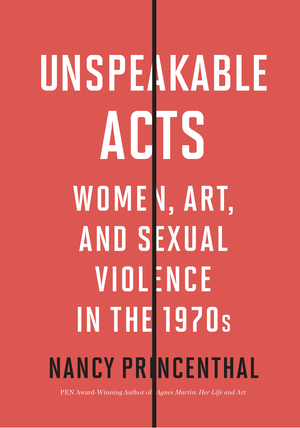 The 1970s was a time of deep division and newfound freedoms. Galvanized by The Second Sex and The Feminine Mystique, the civil rights movement and the March on Washington, a new generation put their bodies on the line to protest injustice. Still, even in the heart of certain resistance movements, sexual violence against women had reached epidemic levels. Initially, it went largely unacknowledged. But some bold women artists and activists, including Yoko Ono, Ana Mendieta, Marina Abramovic, Adrian Piper, Suzanne Lacy, Nancy Spero, and Jenny Holzer, fired up by women’s experiences and the climate of revolution, started a conversation about sexual violence that continues today. Some worked unannounced and unheralded, using the street as their theater. Others managed to draw support from the highest levels of municipal power. Along the way, they changed the course of art, pioneering a form that came to be called, simply, performance.

Award-winning author Nancy Princenthal takes on these enduring issues and weaves together a new history of performance, challenging us to reexamine the relationship between art and activism, and how we can apply the lessons of that turbulent era to today.

Throughout the art-historical record, sexual violence against women was a subject typically rendered by male artists for a male audience. Princenthal shows how that finally changed in the last quarter of the 20th century…women took an experience that had been artistically mined by men for millenniums…and found ways to convey it in their own terms… [She] takes a tangled history and weaves it into an elegant account

Nancy Princenthal's Unspeakable Acts delves into the links between violence and silence, art and terror, and how pioneering women made them into art. … [Her] lucid and challenging narrative chronicles the efforts of artists and activists (who were frequently one and the same) to find 'language for violence [as] the first step in mitigating its effects.' … Princenthal is also deft at drawing a roadmap through the political, social, and aesthetic divisions of the '70s.

A galvanizing work that seems bound to inspire artists for many years to come.

Unspeakable Acts is an important and urgent book. Princenthal's trenchant, honest, complex exploration of the radical representations of sexual violence in the 1970s delineates the upheaval of implicit assumptions about rape, bodies, silence and speech in particular works by individual artists in light of their broader artistic and political meanings and lasting consequences. I read it with breathless, captive attention.

— Siri Hustvedt, author of "The Blazing World and Memories of the

Nancy Princenthal speaks of the unspeakable brilliantly, bravely, thoroughly, and thoughtfully. She addresses art, literature, theatre, film and video games… and the real life politics they reflect, offering a long overdue look at creative coverage of rape, domestic violence, and other acts. In the process she has also written one of the best recent books on feminist arts.

Riveting… A potent study of feminist art and activism of the 1970s… Clearly grasping the scope and complexity of her subject, the author contextualizes the stumbles and stamina of feminism, addressing objectification and exploitation while focusing on artists' pivotal acts of defiance, which brought heightened awareness to taboo or underdiscussed topics… Paying attention to the groundbreaking work of artists giving voice to sexual violence, Princenthal plainly establishes art's significant contributions to social change movements.