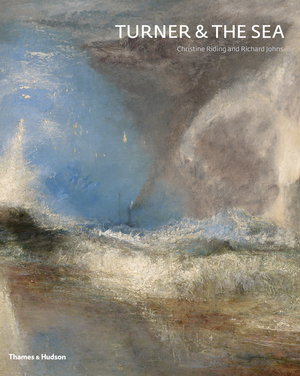 A beautifully produced book showcasing Turner’s depictions of the sea, published to coincide with a major exhibition

This is the first publication to focus on J. M. W. Turner’s lifelong fascination with the sea, from his Royal Academy debut in 1796, Fishermen at Sea, to his iconic maritime subjects of the 1830s and 1840s such as Staffa, Fingal’s Cave. It places Turner and his work firmly in the broader field of maritime painting that flourished in nineteenth-century Britain, France, Germany, Holland, and America.


The majority of the works illustrated here—paintings, watercolors, sketches, sketchbooks, and engravings—are by Turner, but there are also comparative works by some forty other artists including Winslow Homer, James McNeill Whistler, John Constable, Benjamin West, and Gustave Courbet. The book is organized thematically and chronologically, and the subjects range from “Contested Waters,” which examines what was at stake for marine painting during the Napoleonic Wars, to “New Wave,” an exploration of Turner’s international and often surprising legacy for the art of the sea.

Provides intriguing insights into the evolution of Turner's reputation.

A rare example of an exhibition catalogue that functions independently as an informative, thorough investigation of an underexplored aspect of an artist's oeuvre. Provides[s] a rich art historical context for the artist's maritime productions…Highly recommended.

Contains many high quality color reproductions…Gives extensive analysis of Turner's work in the context of the Dutch painters who preceded him.

Several of the works presented in this book…reveal an important Scottish dimension to Turner's marine art.

Christine Riding is senior curator of paintings and head of the arts department at the National Maritime Museum, London.

Richard Johns is curator of prints and drawings at the National Maritime Museum.