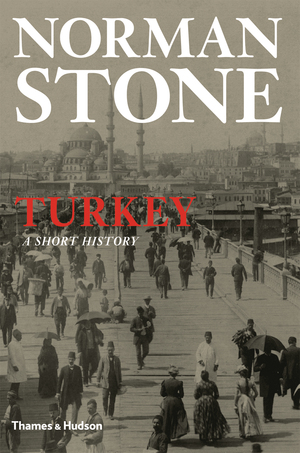 In Turkey: A Short History the celebrated historian Norman Stone deftly conducts the reader through the fascinating and complex story of Turkey’s past, from the arrival of the Seljuks in Anatolia in the eleventh century to the modern republic applying for EU membership in the twenty-first. It is an account of epic proportions, featuring rapacious leaders such as Genghis Khan and Tamerlane, the glories of Sultan Süleyman the Magnificent, and Kemal Atatürk, the reforming genius and founder of modern Turkey.

For six hundred years Turkey was at the heart of the Ottoman Empire, a superpower that brought Islam to the gates of Vienna and stretched to North Africa, the Persian Gulf, and the river Volga. Stone examines the reasons for the astonishing rise and the long decline of this world empire and how for its last hundred years it became the center of the Eastern Question, as the Great Powers argued over a regime in its death throes. Then, as now, the position of Turkey—a country balanced between two continents—provoked passionate debate. Stone concludes the book with a trenchant examination of the Turkish republic created in the aftermath of the First World War, where East and West, religion and secularism, and tradition and modernization are vibrant and sometimes conflicting elements of national identity.

An interesting read…should be read to gain a better understanding of an interesting and influential region in the world.

Norman Stone is Director of the Turkish-Russian Centre at Bilkent University, Ankara. His previous books include The Eastern Front, 1914-1917 (winner of the Wolfson Prize), World War One: A Short History, and The Atlantic and Its Enemies: A Personal History of the Cold War.