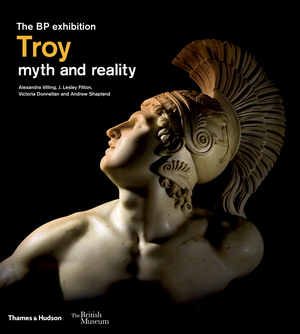 This arresting exploration of the story of Troy examines the mythology, archaeology, and universal human significance of the tale over millennia.

For over 3,000 years the myth of Troy has fascinated artists and audiences alike—from the epic tales of Homer’s Iliad and Virgil’s Aeneid to retellings from Chaucer to Madeline Miller, and stagings from Shakespeare’s Troilus and Cressida to Brad Pitt’s rendering of the hero Achilles. But what is it about this tale that makes it so eternally appealing, and what do we actually know about historical Troy? This richly illustrated volume tells the story of Troy and the great Trojan War through the lens of objects from the Greek Bronze Age to the twenty-first century.

Using the Classical works of art for which the British Museum is internationally known, this book considers the ancient myth through the eyes of Greek and Roman artists. Drawing on the latest research, it chronicles the search for Troy that convinced the world of the city’s existence, beginning with the nineteenth-century excavations by Heinrich Schliemann. Focusing on the major characters in the story—Helen of Troy, Achilles and Hector, Aeneas and Odysseus—it illustrates how artists from Cranach and Rubens to Romare Bearden and Cy Twombly have been inspired to explore contemporary themes of war and heroism, love and beauty.

Troy sheds new light on a story that has resonated for millenia.

This wide-ranging, readable book deserves a life independent of the British Museum exhibition… The excellent text is accompanied by some 285 excellent images… This beautiful volume could serve as a textbook, secondary resource, or pleasure reading.

Lesley Fitton (Honorary Research Fellow) is based in the Department of Greece and Rome at the British Museum.

Andrew Shapland is Curator of the Aegean World and Classical Greek collections at the Ashmolean Museum, Oxford.

Alexandra Villing (Curator, Greek collections) is based in the Department of Greece and Rome at the British Museum.

Victoria Donnellan (Project Curator, Troy exhibition) is based in the Department of Greece and Rome at the British Museum.