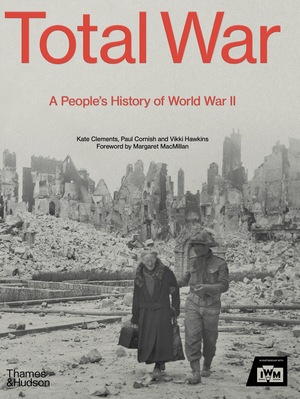 An authoritative illustrated history of World War II complemented by artifacts and stories of those who lived through it from across the globe.

Total War is an illustrated examination of the most significant historical episode of the twentieth century: World War II. This immersive account of a conflict that permanently reshaped the geopolitical landscape is told not only through compelling photographs, maps, and infographics produced specifically for the book, but also through a series of artifacts that convey the real-life stories of some of the millions worldwide—from the United States to Europe, Asia, and Africa—who were affected by the war.

Published to coincide with the much-anticipated opening of the new Second World War and Holocaust galleries at the Imperial War Museums (IWM), London, in 2021, Total War is an essential volume for anyone interested in the everyday realities of one of the most brutal and far-reaching wars in modern history. Numerous images from the IWM’s unique Second World War and Holocaust collection are included, many of which have rarely been published. From a doll belonging to a Jewish child refugee to a kamikaze pilot’s final letter, and from Molotov cocktails to a US airman’s bomber jacket, the book delves into the significance behind the deeply moving objects reproduced on its pages. With precision, sensitivity, and a truly global approach, Total War offers a strikingly original visual perspective on an emotive and often controversial subject whose implications are still being felt today.

Kate Clements is a curator for the new Second World War Galleries at IWM. She has undertaken work on a number of exhibitions at the museum, as well as producing a range of digital content.

Paul Cornish is Senior Curator for the new galleries. He is the author of The First World War Galleries and has edited and contributed to several publications relating to the material culture of conflict.

Vikki Hawkins is a curator at IWM. She was previously the curator of “Wounded: Conflict, Casualties and Care” at the Science Museum, London, and has published on the subject of displaying marginalized histories in museums.

Margaret MacMillan is a Canadian historian and professor at the University of Oxford.