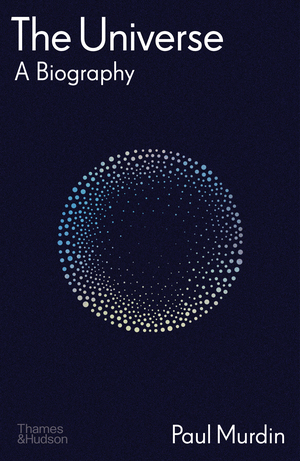 The story of our Universe, from its beginning in the first milliseconds of the Big Bang up to our present moment and beyond, told in a gripping narrative by one of the world’s leading astronomers.

Everyone knows astronomers use telescopes to peer into distant space. But did you know that they also use them as time machines to look back into the past? In this fascinating and original book, world-renowned astronomer Paul Murdin lays out the entire history of the Universe from here on Earth into the distance, leading us step by step through the history of time and space.

Our knowledge of the Universe is greater than ever thanks to cutting- edge scientific research, as well as a new age of space exploration and discovery, and Murdin has been at the forefront of this inquiry—he was the first person to identify a black hole. In The Universe, Murdin draws on his expertise in the field to explain difficult concepts such as black holes, nebulae, and dark matter and relates them to the most important characters and events in the history of our Universe: powerful explosions, the largest planets, galaxies, and celestial bodies. Structured in a clear, accessible fashion as a “biography” of our Universe, this history begins at the Big Bang and proceeds stage by stage through the story of our cosmos.

Full of fascinating details about our own existence, for instance that two-thirds of the atoms in our body are hydrogen atoms formed in the first few minutes of the Big Bang, and that we are a by-product of the manufacture of galaxies and stars, this volume offers a glimpse into the future of our Universe and what it means to us all.

[A] beautiful tour through the cosmos… Murdin offers easy-to-grasp explanations of knotty physics concepts…and also shows how the invention of radio astronomy, satellites, and ever-more complex telescopes has led to a deeper understanding of space… Beautifully illustrated… For readers interested in space but new to the game, this is a fine place to start.

Paul Murdin is a professor emeritus at the University of Cambridge’s Institute of Astronomy. Since 1963, he has been a research scientist studying supernovae, black holes, and neutron stars; an observatory administrator; and a science policy maker for the British government and the United Kingdom’s Royal Astronomical Society. In a parallel career, he is a broadcaster and commentator for the BBC and CNN and is identified as the co-discoverer of the first stellar black hole found in our Galaxy, Cygnus X-1.