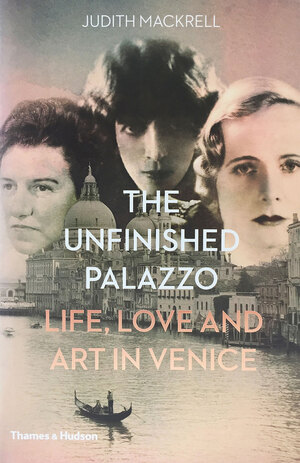 The story of Venice’s “Unfinished Palazzo”— told through the lives of three of its most unconventional, passionate, and fascinating residents: Luisa Casati, Doris Castlerosse, and Peggy Guggenheim

Commissioned in 1750, the Palazzo Venier was planned as a testimony to the power and wealth of a great Venetian family, but the fortunes of the Veniers waned midconstruction and the project was abandoned. Empty, unfinished, and decaying, the building was considered an eyesore until the early twentieth century when it attracted and inspired three women at key moments in their lives: Luisa Casati, Doris Castlerosse, and Peggy Guggenheim.

Luisa Casati turned her home into an aesthete’s fantasy where she hosted parties as extravagant and decadent as Renaissance court operas, spending small fortunes on her own costumes in her quest to become a “living work of art” and muse. Doris Castlerosse strove to make her mark in London and Venice during the glamorous, hedonistic interwar years, hosting film stars and royalty at glittering parties. In the postwar years, Peggy Gugenheim turned the Palazzo into a model of modernist simplicity that served as a home for her exquisite collection of modern art that today draws tourists and art lovers from around the world. Each vivid life story is accompanied by previously unseen materials from family archives, weaving an intricate history of these legendary art world eccentrics.

Thoughtful, gracefully written and engaging… Like Paris, Venice is a subject rife with cliché. Ms. Mackrell sidesteps this pitfall by focusing on one tiny part of the city. By book's end, the complexly fated, much-altered Venier comes to seem a mirror of its occupants. Self-\xc3\x82\xc2\xadrealization is often bound up with real estate, and rarely more so than at the palazzo non finito.

A breathtaking social portrait, peeling the glitter from privileged lives even as it fleshes out the spectacle they created.