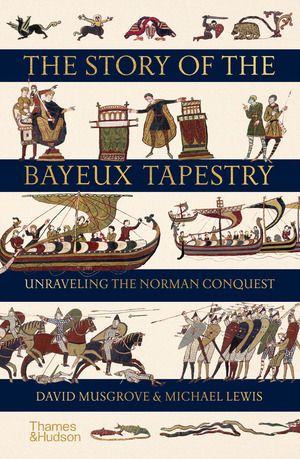 The definitive and fully illustrated guide to the Bayeux Tapestry. The full history of the events leading up to the Battle of Hastings and the story of the tapestry itself.

Most people know that the Bayeux Tapestry depicts the moment when the last Anglo-Saxon king of England, Harold Godwinson, was defeated at the Battle of Hastings in 1066 by his Norman adversary William the Conqueror. However, there is much more to this historic treasure than merely illustrating the outcome of this famous battle. Full of intrigue and violence, the tapestry depicts everything from eleventh-century political and social life—including the political machinations on both sides of the English Channel in the years leading up to the Norman Conquest—to the clash of swords and stamp of hooves on the battle field.

Drawing on the latest historical and scientific research, authors David Musgrove and Michael Lewis have written the definitive book on the Bayeux Tapestry, taking readers through its narrative, detailing the life of the tapestry in the centuries that followed its creation, explaining how it got its name, and even offering a new possibility that neither Harold nor William were the true intended king of England. Featuring stunning, full- color photographs throughout, The Story of the Bayeux Tapestry explores the complete tale behind this medieval treasure that continues to amaze nearly one thousand years after its creation.

Michael Lewis is head of portable antiquities & treasure at the British Museum, visiting professor in archaeology at the University of Reading, and an expert on the Bayeux Tapestry.