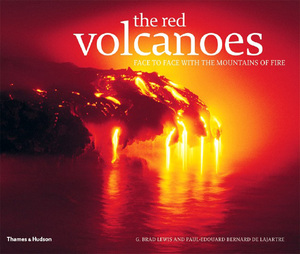 All of the elements that form our planet were originally forged in cosmic furnaces: all the food we eat and thus our bodies themselves recycle atoms that once know volcanic fire.

The most active—and most visited—volcano on earth is Kilauea in the Hawaii Volcanoes National Park, seen by three million people every year. Along with its counterpart Piton de La Fournaise, on the French island of Réunion in the Indian Ocean, it is characterized by extraordinary lava flows that travel great distances  through a spectacular landscape. Together, they form the focus of this dazzling photographic essay by two renowned photographers who have spent years living side by side with their subjects, striving to capture the raw fires of the Earth at their most dramatic.

With an introduction by Jack Lockwood, one of the world's leading volcanologists ,and Alain Gerente, a documentary filmmaker, this is an invitation to share an amazing glimpse into the heart of these volcanoes.

G. Brad Lewis is a leading volcano and nature photographer. His volcano images have appeared on the covers of Life and Geo and interviews with him have been seen on NBC’s Today Show, CBS Evening News and the Discovery Channel.

Paul-Edouard Bernard de Lajartre lives in Réunion, where he has been documenting the lava flows of Piton de La Fornaise for a number of years.

John P. Lockwood is one of the world’s leading volcanologists. He is currently President of Geohazards Consultants International, Inc., and is the author of many articles on geology and volcanology. He also worked as consultant for the movie Dante’s Peak.

Alain Gerente is a French documentary filmmaker, based in Réunion, whose films include L’Eruption Magique.