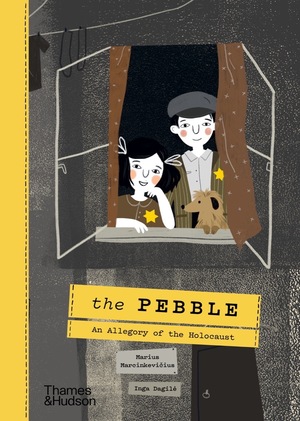 “My name was Ethan and it was the summer of 1943. I was sitting onthe rooftop with my best friend Rivka and the whole world was at my feet.” This is the story of Ethan, a gifted violinist, and his best friend, Rivka, growing up where children laugh, dogs bark, and women chat.All of this would be beautiful and idyllic, if not for one big, dark “but”—no one can leave this town, and once you go through the gates, you never comeback…

This picture book is light in appearance only—in fact, its pages unfold a story about one of the darkest stages of human history—the Holocaust. Marcinkevic?ius lays out life in the ghetto in spare sentences, highlighting the complexities of the human condition: although the block is surrounded by a wall and guarded by soldiers, you can climb on the roof and dream there; although families are taken out of the ghetto one by one and do not return, it does not extinguish people’s hope and culture: performances are held in the theater, voices echo in the streets, neighbors gather, children and their pets play.

It is not easy to talk about topics this difficult, but Marcinkevicius and Dagile portray Ethan as he witnesses the disaster that befell the Jewish people with great sensitivity.

Marius Marcinkevicius is a medical practitioner and author. He has written seven children’s books. In 2017, his book Friendship on an Elephant's Trunk won the Best Book for the Youngest Readers award by IBBY Lithuania.

Inga Dagile is a Lithuanian freelance designer and illustrator of children’s books. Inga graduated from the Kaunas Art Institute in 2003 and from the Vilnius Academy of Arts in 2005.

Jura AviÅ¾ienis is a literary translator working from Lithuanian to English. She lives in Chicago.