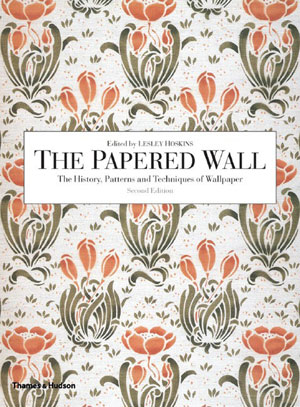 The definitive international history of wallpaper from its origins to today's digital and laser printing, now brought completely up to date.

Wallpaper is high fashion, and literally so in the wallcovering lines launched by Gucci in 2003 and Benetton in 2004. Innovation has been fueled by technology (with developments such as multicolored dry rub-off transfers); by environmental concerns (with nonwovens, or vlies, that breathe and create no harmful residues); and by a profusion of retro, luxury, naturalistic, humorous, and artistic ideas.

First published in 1994, The Papered Wall has been revised to include a new and fully illustrated chapter on recent trends and a thorough reworking of its invaluable reference section, including suppliers of historic patterns and collections open to the public.

Written by experts from Belgium, Britain, France, Germany, and the United States, this authoritative volume begins with the individually printed sheets that formed the first wallpapers in the fifteenth century. It encompasses English flocked papers with repeats as large as seven feet, spectacular French panoramas encircling an entire room, and exquisitely printed bowers of roses. By 1900 technical inventiveness and designers like William Morris had put new kinds of wall coverings and a vast choice of patterns before a worldwide market. The twentieth century saw a struggle between traditional ideas and radically “modern” styles—Jugendstil, Art Deco, Bauhaus, and postwar contemporary designs.

Complete with a guide to care and conservation, this is a timely, informative, and stimulating record of wallpapers for every use and taste.

Lesley Hoskins is a Specialist Curator at the Museum of Domestic Design & Architecture, Middlesex University, and a curator in the field of nineteenth- and twentieth-century interiors and wallpapers.