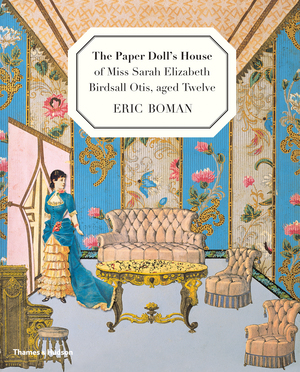 An extraordinary paper doll’s house enhanced here by evocative photographs of Miss Otis’s late 19th-century life, which will delight lovers of art and interior design as well as children

In 1884, a remarkable twelve-year-old girl made a paper doll’s house. While these were fashionable enough at the time, they were usually drawn and painted. Miss Sarah Elizabeth Birdsall Otis, however, chose the medium of collage: scraps of wallpaper, gilded trim, colored-in cut-outs of furniture, and engravings from mail-order catalogs, all glued down unselfconsciously in book form with no regard for scale or realism. What makes the album so special is its creator’s stunning, innate artistry. She also populated her house with paper dolls, their delightful cut-out costumes preserved in envelopes marked with the names of the characters and their accessories stored in paper squares marked “Hats and Bonnets” or “Umbrellas and Parasols.” Eric Boman’s photographs capture Miss Otis’s vivid fantasy world in all its quirky splendor. Exploring the household, from the conservatory, parlor, and library to the dining room and bedrooms, the images portray a domain of astonishing color and aesthetic daring. Context is provided by period photographs depicting the era of Miss Otis’s privileged Long Island life. The twelve-year-old girl grew up to become a formidable personality, a playwright, and a president of the Girl Scouts. Here, her youthful creativity is celebrated in a format guaranteed to appeal to adults and children alike.

If Mrs. Edey had followed the path suggested by her dream home, she might have become an interior designer whose style was elegant, playful and scaled for drama.

Take a vibrant tour of a remarkable doll's house made in 1884 by the titular preteen aesthete. Marvel at the joyful detail of the furniture, clothes, and accoutrements, all crisply preserved in Boman's photos.

Eric Boman has created a winning small world…Otis's dollhouse…has a great deal of charm, which is captured in photos that show that its creator had a strong sense of color and chose pieces and shapes that were often not to scale, creating amusingly askew proportions.

More than just a fantasy house with fantasy inhabitants…This adorable collector's item has more than the usual figure drawings and paintings one might find in a typical paper doll book.

Nothing short of remarkable. All of [Sarah Elizabeth Birdsall Otis's] paper creations have been well preserved and beautifully photographed by the author.

A lovely example of art, color and imagination…A great book for the young reader and/or adult[s].

Anyone who cherishes their paper doll days will love the meticulous conservatory, the pastel dressing room, the two nurseries, the sitting rooms…As young children thumb through the pages, they can engage in open-ended play and do so while learning all about what life looked like in the 1800s.

Eric Boman is a photographer and writer, whose work has appeared in Vogue, Vanity Fair, and House & Garden. His publications include Rare Bird of Fashion: The Irreverent Iris Apfel. He lives in New York.