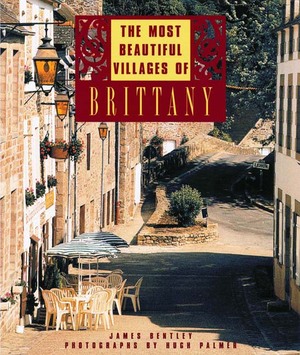 Geography and geology have combined to make Brittany a land distinct from the rest of France. A place of dramatic contrasts, it occupies the great northwestern peninsula of the French landmass where a jagged coastline, fertile plains, and wild moorland lie beneath a sky by rapid turns sullen and sunny. A strong sense of separateness, reflected in the continuing strength of local village traditions, has remained a characteristic of the Bretons who, alone among the peoples of France, are Celts rather than Gauls. The architecture of the Breton villages is a testimony to centuries of religious piety: calvaries and ossuaries abound, including remarkable Gothic examples like those at Rochefort-en-Terre in Morbihan. Josselin in the same departement is home to a magnificent chateau with a Gothic inner facade generally hailed as a masterpiece of sculpture in granite. In Lehon, Cotes-du-Nord, you can stand and admire the ruined grandeur of its priory and chateau or, in Ille-et-Vilaine, explore the restored keep of Grand-Fougeray's thirteenth-century castle. The local houses are often built of granite, an ideal material for resisting the Atlantic winter storms. Though the ocean is sometimes a savage surround to the Breton peninsula, it also provides the seafood that makes any visit to the villages and small towns of Brittany a gastronomic delight. The sea yields succulent lobsters and langoustines, while the villages of the river estuaries enjoy mussels and oysters. Brittany's vigorous and varied village life and architecture are captured in James Bentley's perceptive commentaries and Hugh Palmer's stunning photographs. Complete with a traveler's guide, The Most Beautiful Villages of Brittany offers an evocative portrayal of the coastal and inland communities of this resilient land.