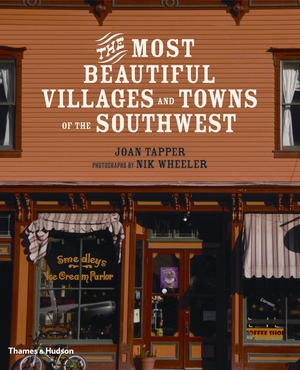 From pueblos to Victorian storefronts to ski resorts: a vision of the Southwest that evokes both America’s frontier heritage and the expansive vistas of its future.

When you think of the American Southwest, it isn’t the towns that initially come to mind. Rather, it’s the incredible landscape: carved-out chasms, towering red rocks, and dramatic desert expanses. But you shouldn’t miss the beautiful old towns—the clusters of adobe houses around Spanish-style plazas and the rows of Victorian miners’ cottages that still cling to precipitous hillsides. Many of these communities started as remote outposts, then flourished in a burst of riches, only to fade again.

Today the Southwest is a region of energetic growth and multicultural vitality, and its quaint towns are enjoying renewed attention as their rich history, striking settings, and distinctive architecture attract Americans touring their homeland’s picturesque byways as well as visitors from around the world.

Nik Wheeler’s stunning photography and Joan Tapper’s perceptive commentaries celebrate the beauty and heritage of thirty special communities in Arizona, New Mexico, Nevada, Utah, and western Colorado. They range from tiny villages of a few hundred people to towns of as much as 40,000, but most are the kind of place where a chance conversation still opens doors: Bisbee, Spring City, Truchas, Tubac, Tombstone, Cimarron, Silverton, Ouray, Winnemucca, Moab, Sedona, and so many more.

A new coffee-table book travels through 28 towns and villages in five states…. Even if you've done a lot of wondering around the red rocks, ghost towns, and mining outposts of the West, chances are you've missed a few of these places. And as you comb through the 208 pages and 308 images here, some of the places are bound to whisper to you.

No shortage of vivid color shots of sweeping vistas, typical architecture and iconic signs and symbols of the region. Entices you to travel to the destinations [the author and photographer] so thoroughly cover. A handsome and information-packed guide…